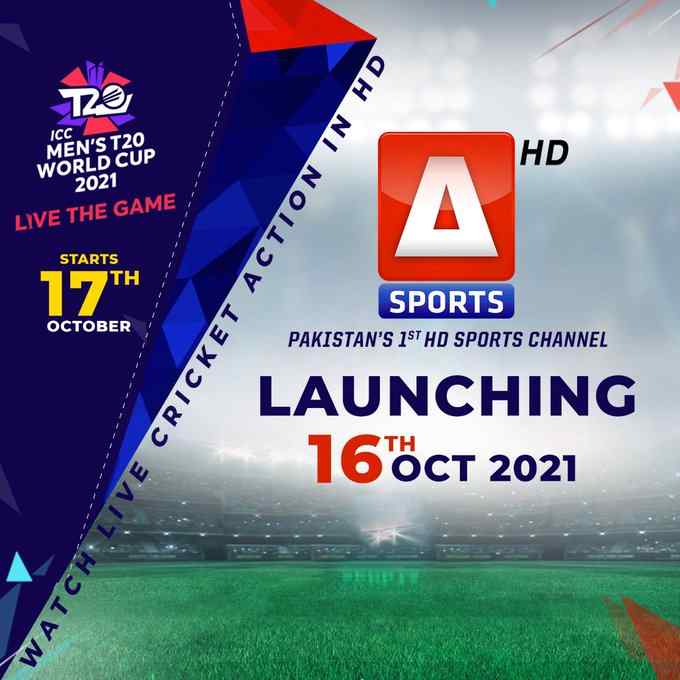 A-Sports HD or ARY Sports is the sister channel of ARY Networks that holds the official rights for major sporting events in Pakistan. A Sports to broadcast the live coverage of all the Cricket Series, ICC Events, and T20 Leagues Live Streaming in Pakistan. A Sports is Pakistan’s First HD Sports TV Channel that begin its services on 16th October 2021

A-Sports HD is an initiative taken by ARY Digital Network, owned by Salman Iqbal who is also the owner of the Karachi Kings Franchise in the Pakistan Super League. Wasim Akram is the president of the TV Channel who announced the great news of launching the first HD Sports channel in Pakistan being president of it.

In his tweet, he mentioned “Delighted to announce that I have joined Pakistan’s first HD sports channel A-SPORTS as President. I would like to thank the ARY Group & especially Salman Iqbal for this opportunity. This is a very exciting development in Sports & media for Pakistan.”

Asiasat 7 has recently unveiled a brand-new sports channel, A Sports HD, which is available on the ARY Network. There is a new sports television station named ARY Sports HD that features an Android and iOS app. A-Sports HD, on the other hand, is a new channel accessible via Asiasat7 at 105.5° East.

Click the Below Button to Watch the Live Match Today

The eighth edition of the Pakistan Super League is scheduled to start in February till March 2023. A-Sports HD successfully purchased the broadcasting rights to the highly anticipated event in Pakistan. A Sports HD to broadcast live coverage of PSL 8 in Pakistan.

A Sports or ARY Sports is the first HD Sports channel in Pakistan that bagged the official rights of all the Pakistan Cricket Series, T20 Leagues, and ICC Tournaments. A Sports Live acquires the official broadcasting rights of the Kashmir Premier League and will broadcast the live coverage of KPL 2023 live in Pakistan. Kashmir Premier League to start its second edition featuring eight teams for the tournament. The tournament is scheduled to start in August 2023.

Pakistan’s first HD Sports Channel A Sports Live purchased the official broadcasting rights for the Asia Cup. A Sports HD to broadcast the live coverage of Asia Cup 2023 Live in Pakistan and its region. The match in Asia Cup 2023 between Pakistan vs India 2023 will be the most awaited match of this year.

A Sports HD purchased the official rights for the Cricket World Cup and will telecast all the matches of CWC 2023 live in Pakistan. Cricket fans in Pakistan can watch Pakistan vs India Live on ARY ZAP. The tournament is scheduled to start in October to November 2023. A total of 10 teams will participate in the tournament in a Round-Robin and Play-Offs stage.

A-Sports Live allows cricket fans in Pakistan to enjoy ICC T20 World Cup 2024 Matches as A-Sports secured the official broadcasting rights for the mega event. The ninth edition of the tournament is likely to commence on October 17th, 2024 held in the USA and West Indies.

A Sports will provide live coverage of warm-up matches as well. Cricket fans can watch T20 World Cup 2024 all matches on Pakistan’s First ever HD Sports Channel launched by ARY Digital Media House Network. The ICC T20 World Cup 2024 Live Stream of the tournament will be available on various sports channels worldwide. Apart from that, here is the schedule of the tournament.

For the first time, A-Sports HD acquires the official telecasting rights for the Qatar FIFA World Cup 2022 in Pakistan. In the history of football, Qatar is the first Islamic country to organize the FIFA world cup. There are a lot of restrictions added to the fans and players in order to respect Islamic rules and regulations. Football fans can watch all the FIFA football matches live on Pakistan’s first private HD Sports channel.