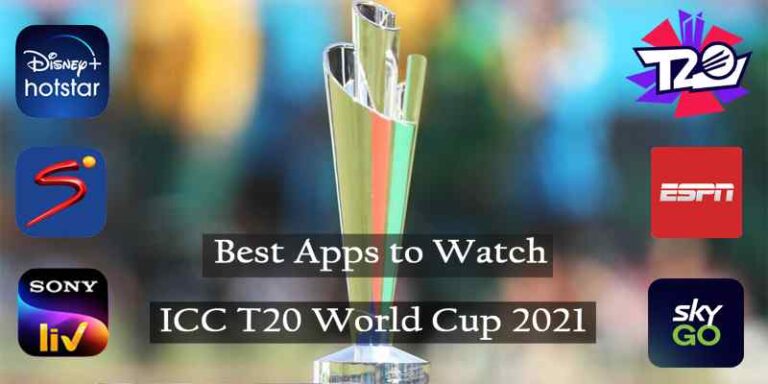 Every cricket fan is excited about the next ICC Men’s Twenty20 World Cup Tournament, which will take place from October 17th to November 14th, 2024, and will be hosted by the USA and West Indies. With all eyes on the biggest and most anticipated competition, we’ve compiled a list of the top apps to enable every cricket fan to remain up to date with ball-by-ball commentary, live score, match updates, latest news, match highlights, playing xi, and match predictions.

The Best App to Watch T20 World Cup 2024 Live on smartphones and Android TV Devices is Disney+ Hotstar, an Over-The-Top (OTT) Platform. Disney+ Hotstar is the Official Digital Media Partner for the T20 World Cup 2024 live broadcast in the United States, Canada, India, and its subcontinent regions. Furthermore, cricket fans will be able to obtain live cricket score updates, highlights, replays, and much more all in one app.

The finest app for watching movies, TV shows, dramas, and even live sports is Disney+ Hotstar Premium. The app features a large library of over 100,000 hours of films and dramas from across the world, including localized Indian content.

Disney Plus Hotstar is a collaboration between Disney and Hotstar, Star India’s existing streaming service. Walt Disney paid $ 71 billion for 21st Century Fox in 2018. As a result, Hotstar’s parent firm, Star of India, became a subsidiary of the Walt Disney Company.

The best aspect of Disney+ Hotstar is that it is frequently updated with fresh content, and the program’s developers continue to ensure that any flaws and glitches are sorted out in the latest editions while maintaining a smooth and user-friendly design.

Sony Pictures Networks India Pvt. Limited’s SonyLIV App has achieved 100 million downloads worldwide. The program runs on most Android smartphones and only takes about 30 MB of memory. Because this program is rated for teens and adults, it is best used under parental supervision.

This app’s enormous library of web series and TV shows promises to give high-quality entertainment at any time and anywhere. Users may easily access popular foreign shows and Indian premieres with subtitles. You can also watch live television networks to keep up with global news. You may use SonyLIV to search for and watch content from a variety of sources.

SonyLIV is a must-have app for movie buffs who have been put off by the language barrier. With subtitles in several languages, you may view any Hollywood film at home. A premium subscription will expand your movie selection even further.

If you love cricket and want to watch the T20 World Cup live telecast, Willow TV is one of the best applications for you. Willow TV lets you watch all your favorite cricket leagues. Whether it’s a local or international game, Android TV and Android devices can stream it. The ideal solution is for fans to have free access to all of their favorite leagues.

Willow TV owned the official rights for all major T20 League and ICC Tournaments such as the PSL, IPL, BPL, BBL, APL, Canada T20, Asia Cup, and T20 World Cup. As a result, the list is extensive, and you can decide if the application is for you.

The best aspect for you is that you may download or play games directly from the app. You can also read blogs and articles. You will find all the information you need there. Fans have their section. Find it and tap it to see the video.

Who hasn’t heard of the SuperSport App? It’s one of the most popular apps in the world, with millions of downloads. The app covers every sports niche, including Cricket, Football, Rugby, Tennis, Moto GP, Snooker, NFL, Basketball, and many other sports live score updates, news, match highlights, and so on.

In terms of the ICC Men’s T20 World Cup 2024, SuperSport is one of the Best Apps for Sub-Saharan Africa and its neighboring regions, where cricket fans may enjoy live scores, match highlights, predictions, and news.

Welcome to your World of Champions, where your SuperSport app experience will provide you with access to everything you need during your athletic event. SuperSport, with its modern design, will take care of you whether you enjoy soccer, cricket, rugby, golf, tennis, motorsports, or other sports.

Enjoy live broadcasts, featured videos, live scores, results, matches/schedules, tables, main scores, rankings, latest news, real-time notifications of events during a match, race, or tournament, the ability to set an automatic reminder in the app to remind you when an event will begin sports, and much more.

The software also provides access to live streaming on the DStv app. Live viewing is only available to DStv users with Connect IDs in Sub-Saharan Africa and adjacent territories.

Subscribe to ESPN+ for live sports, exclusive content, premium articles, Fantasy tools, and more. ESPN is a US-based global sports channel. It has regional networks in numerous nations and broadcasts in 200 countries. The ESPN Android app keeps viewers up to current on sports scores. On their phones, they may watch the newest sports news and videos.

The ESPN App lets you watch live streams of ESPN, ESPN2, ESPN3, ESPNU, and SECN. Your TV provider and package, and even your Internet provider, decide your access to live video.

In addition to providing live scores, match updates, highlights, and news, Cricket Australia is one of the most downloaded free apps in Australia. the best Australian App for Live Streaming, News, Results, and Highlights, produced by the Australia Cricket Board. This app is currently free on Google Play and iOS.

Sky Go is a Sky Sports-developed internet television streaming service. But it’s free for Sky customers. Sky domestic subscribers with a minimum Sky Starter subscription can use Sky Go for free. You can now watch Sky TV episodes on the go.

It is feature-rich and offers hours of viewing. Enjoy blockbuster movies, live sports, and exclusive programs with no interruptions. Sky Go has hundreds of on-demand titles and upgrades. Sky Go users may also watch over 80 whole seasons of award-winning series. Sky Go has over 30 channels that subscribers can subscribe to.

JioTV is the best free app for watching ICC Men’s T20 World Cup 2024 matches online. However, keep in mind that the App is solely free for Jio Reliance Network users, while other telecommunication network users must pay monthly or weekly subscription fees.

It is a free entertainment software produced by Reliance Jio Infocomm Limited. The app provides access to movies, entertainment programming, sports, and television services for mobile devices and Android TV. Jio TV allows viewers to watch their favorite TV shows on the go.

Customers can watch high-definition shows for free on JioTV – Live TV & Catch-Up. There are over 600 TV stations to choose from, including more than 100 HD multilingual channels. It covers English as well as every Indian language that is now spoken. Users may catch up on, or even binge-watch, the most recent programs while exploring a variety of genres.

They can select from a wide range of television genres, including Entertainment, Movies, Sports, Regional, News, Music, Business, Devotional, Lifestyle, and Kids. In India, prime-time programs have a seven-day catch-up period. With this app’s Live TV feature, you can watch any big sporting event live.

For those who need to do something other than watch, the app features a Pause & Play feature. You can search for popular and trending shows in the ‘Featured’ category. The ‘News’ tab showcases the top stories of the day.

Cricingif is one of the best apps for Pakistani cricket fans to experience T20 World Cup 2024 Live Score, ball-by-ball commentary, Match Updates, Predictions, Teams & Squad, and much more. Cricingif, one of the best live cricket score apps, is the most inventive application ever created. The first Live Cricket Score Application in Pakistan covers all Domestic and International Series, T20 Leagues, and International Cricket Council (ICC) Tournaments.

YuppTV is one of the most popular online television platforms, offering over 200 live TV networks, the most recent regional and Bollywood films, and television, series, shows, and series on demand.

It provides over 300 Indian TV stations in over 15 languages including Gujarati, Marathi, Urdu, Tamil, Telugu, Bangla, Hindi, Kannada, Bengali, Malayalam, Punjabi, Oriya, Nepali, Sinhalese, and English. There are numerous regional television channels available, including Hindi TV, Tamil TV, Telugu TV, Malayalam TV, Kannada TV, and Punjabi TV. On the YuppTV platform, you can also watch the news. If you want to use the most recent YuppTV features, you must acquire a YuppTV premium subscription.

OSN Play is a free service for current OSN Satellite TV subscribers. Your OSN subscription determines what you can see. If you are not on a subscription, you will be unable to view the material. OSN Play is the other best platform to watch the T20 World Cup 2024 whether you live in North Africa or the Middle East. OSN Play delivers live scores, match updates, match previews, and all other breaking news.

With the Tata Sky Mobile App, you can take a pocket television with you everywhere you go. It allows you to view things like sports, movies, and news. What’s more exciting is that you may watch Live Cricket TV HD without interruption.

If you are not a fan of live cricket, you may watch over 5000 Hollywood and Bollywood films. Furthermore, 600+ TV Channels such as Sony, Star Plus, Colors, Zee TV, SAB, and &TV; Live News with Aaj Tak, ABP News, NDTV India, and India TV are available. Sports enthusiasts can watch live cricket, Kabbadi, hockey, badminton, and football matches with a single click. You can also download and watch your favorite content later.’