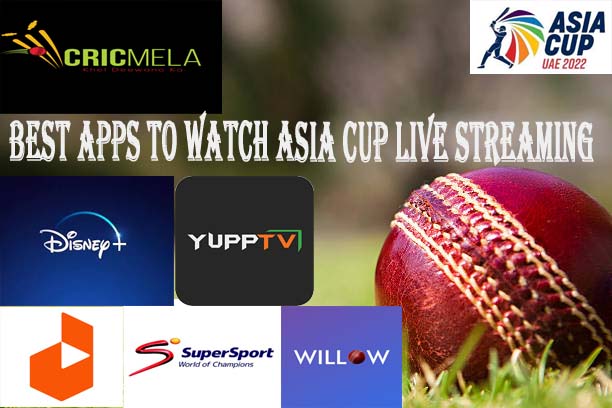 What are the best Apps to Watch Asia Cup Live: If you are an avid fan of cricket and enjoy watching matches live on your television, then you will be pleased to know about the Apps that allow you to enjoy the live-action of all cricket tournaments and series. However, finding these apps can be quite a challenge, so here we have compiled a list of the Free Apps to Watch Asia Cup 2022 that enable you to watch cricket matches and highlights on your TV by using an Android set-top box or a Smart TV.

This year will be the fifteenth edition of the Asia Cup which was postponed due to Covid-19 and later was rescheduled in Sri Lanka. But, due to the economic crisis, the Asian Cricket Council (ACC) decided to shift the tournament to a neutral venue. Now, United Arab Emirates is hosting a tournament scheduled to commence from August 27th till September 11th, 2022.

A total of six teams India, Pakistan, Sri Lanka, Afghanistan, and Bangladesh will be a part of the Asia Cup 2022 battling to become the Champion. The biggest match between the arch-rivals is likely to be played on 28th August at Dubai International Stadium as India and Pakistan lock their horns in the second match of the Asia Cup Cricket Tournament 2022. Click Here to Watch Live Cricket Match Online Today: LINK

YuppTV, the biggest South Asian OTT provider secured the digital rights for the Asia Cup 2022. Viewers from Australia, the United States, Europe, Singapore, and South Asia can watch all matches on the digital platform YuppTV with a premium subscription.

YuppTV is a service that broadcasts both live television and movies from South Asia. Consumers can view content on as many as six different devices at once, including TVs, STBs, computers, cellphones, tablets, and gaming consoles, expanding the reach of broadcasters and content providers.

In the United States and Canada, YuppTV is the exclusive cricket broadcaster. You can get the YuppTV app for your phone right here. You can watch live cricket on your phone with a subscription that costs $9.99 per month, $54.99 each half-year, or $99.99 per year.

Cricket viewers residing in the United States can watch Asia Cup 2022 on Willow TV. To avail the subscription package, it can be active through Sling TV, Dish TV, Fios, Spectrum, Google Fiber, Xfinity, Optimum, and CenturyLink.

Willow TV makes cricket videos of a high definition quality. In North America, it is the only network with the right to broadcast cricket. This network broadcasts live cricket coverage around the clock. They have partnered with numerous cricket organizations as an official broadcaster, including Cricket South Africa, the Indian Premier League, Zimbabwe Cricket, the Bangladesh Cricket Board, the Pakistan Super League, and the Pakistan Cricket Board. In order to watch live matches on your mobile device, you can get the willow TV app from the Google Play Store. This can be viewed for a low monthly charge via satellite or cable TV.

Daraz is undoubtedly the Best App to Watch Asia Cup 2022 in Pakistan for free without any subscription charges. You can download the App from Play Store and App Store and enjoy the live action of Asia Cricket T20 Cup 2022 matches including the Pakistan vs India Match.

Daraz App acquired privileges from both Pakistan Television (PTV) and Ten Sports, a pay-television provider. As part of a series of agreements with the Asian Cricket Council, the pay-television network has owned global media rights to the competitions since 2014. (ACC).

Daraz App will provide live coverage of every game throughout the two-week tournament, which will begin in Dubai on August 27 after being moved from Sri Lanka owing to economic concerns. Afghanistan, Bangladesh, India, Pakistan, and Sri Lanka will compete in the 2018 Asia Cup, along with a sixth team determined by a qualification scenario in Oman.

Using your Sky Box in conjunction with your Sky TV subscription is the most obvious way to watch Sky Sports, but if you have Virgin TV and the right television bundle (Virgin’s Ultimate Oomph package), you can also watch Sky Sports. If you have the Complete Sky Sports Pack, you will be able to watch Sky’s exclusive selection of live sporting events, as well as highlights and news, on each of the 10 Sky Sports channels.

Sling TV, which is now the market leader in a la carte live TV streaming and is owned by Dish Networks, is likely the finest option available to watch Asia Cup 2022 in USA. SlingTV provides users with two different packages: Sling Orange and Sling Blue. Sling Blue is the subscription package that you need if you want to see the highest-quality content that Fox Sports has to offer.

However, the free trial was discontinued in March, and as of April 21, new customers were eligible for a discount of fifty percent on their first month’s subscription. This brought the price of the singular plan down from $35 per month to $17.50, and the price of the combined Orange and Blue plans down to $25 from $50.

You will be able to watch events such as the T20 world cup, the PSL, the BBL, the WBL, and the IPL when you subscribe to SuperSport. It is one of the most popular live streaming cricket apps that can be downloaded from the Google Play Store, with more than 10 million downloads to its name.

The SuperSport app has been updated to include a number of new features, the most notable of which are a more vibrant visual experience, improved search capabilities, and comprehensive coverage of your preferred sports. In addition, the application can be downloaded through the Apple Store as well as the Huawei App Gallery.

Numerous TV stations broadcast in numerous languages. You’ll have access to over 800 standard and high-definition television channels. You should get the JioTV app on your phone if you want to watch your favorite sports on the go. Jio is offering an exciting Disney+ Hotstar VIP subscription for 12 months for just 399 INR.

JioTV has introduced 4 intriguing data options, one of which offers free streaming of the matches. All the information you need to know about these data packages is right here; The 401(k) program is the first option. You’ll have access to 3 GB of data each day. A whole 28 days can be used with this strategy.

Disney+ Hotstar won the global OTT (Audio/Visual) Digital rights for the Asia Cup 2022 in Indian Subcontinent. Cricket fans in India can watch the live stream of all matches on a digital platform Disney+ Hotstar with a premium subscription available in two-tier (Monthly/Annual).

When it comes to premium content, Disney+ Hotstar is unrivaled in India. The service offers a wide selection of original series, foreign films, and coverage of every match. You can watch any sporting event, not just the IPL and the ICC Men’s T20 World Cup, without purchasing a subscription. Yet only Indians can gain access to this free stuff.

Mobile users can get live sporting events by downloading the Disney+Hotstar App from the Google Play Store. You can subscribe to its VIP Plan, the most affordable yearly plan, to enjoy live sports, TV shows, movies, news, and Hotstar all in one convenient location.

Users of the Airtel network in India will be able to watch Asia Cup 2022 on their smartphones and Android TVs thanks to Airtel TV, which has one of the best network coverages in India. You may download the Airtel TV app from the Google Play Store and install it on your Android smartphone or tablet.

Open the Airtel TV app after you have finished installing Airtel TV, and then sign in using your Airtel account. After you have successfully logged in, you will be able to view a schedule of forthcoming cricket matches on your screen. To watch a match, all you need to do is click on it, and then choose the channel on which you want to view it. Additionally, you have the option to create reminders for when a match is about to begin.

We hope that we have cleared your question of Where to Watch Asia Cup 2022 in UK, USA, Australia, Canada, Pakistan, India, Afghanistan, Sri Lanka, Bangladesh, and MENA Countries. All of the above-mentioned apps are best in their respective countries. So, you can choose the app accordingly.